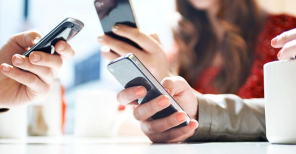 Class action lawsuit ignited by Chicago Tribue investigation claiming that certain iPhone models and Galaxy S models emit radio frequency (RF) radiation levels that exceed safety limits set by the Federal Communications Commission (FCC). The lawsuite has been filed two days after the study, on Friday, in the US District Court for the Northern District of California on Friday

"All iPhone models, including iPhone 7, are fully certified by the FCC [Federal Communications Commission] and in every other country where iPhone is sold," Apple told the publication.

"After careful review and subsequent validation of all iPhone models tested in the [Tribune] report, we confirmed we are in compliance and meet all applicable … exposure guidelines and limits."

(via "Apple, Samsung hit by lawsuit over 'unsafe' RF levels from some iPhone, Galaxy models")

The reason is that the FCC allows for RF emissions to be measured up to 25mm away from the body - so if you use the phone like that, you're probably ok in the radiation category.

For example, the Chicago Tribune reported that for the Galaxy S8, the RF levels measured 2mm from the body exceeded the FCC's limit by 500%. The study also found that the iPhone 7, Galaxy S9, and Galaxy J3 exceeded the RF emission limits that the FCC deems as safe.  At a 5mm distance the iPhone 7 models averaged an exposure level of 2.9W/kg, and at 2mm the emissions ranged from 3.5W/kg to 7.15 W/kg. The FCC limit is 1.6 W/kg. The iPhone X and iPhone 8 also scored above the limit in 3 out of 4 tests.

Meanwhile, Apple's iPhone and Samsung's marketing/ads depict people using the phone close to the body, as the lawsuit cites.

"Defendants have touted the use of their smartphones as being safe and appropriate to use while touching or within close proximity to the human body," the plaintiffs' lawsuit reads, before outlining the dangers of excessive RF exposure.

The lawsuit also complains that Apple had warnings about the distance the devices were tested for RF emissions before the iPhone  7, but have since omitted that info for later models.

According to the lawsuit, Apple is "knowingly designing and manufacturing iPhones whose RF exposure exceeded safe limits when used on or in close proximity to the human body". And Apple failed to "warn or protect Plaintiffs and Class members from RF exposure and, instead, covered up any risks by misrepresenting the safety of the smartphones." 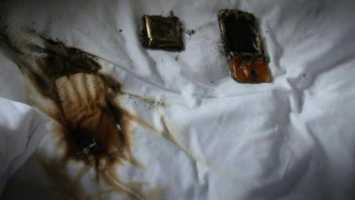 Cell Phone Oveheats, Catches Fire Under Pillow
Tweet
The pictures pretty much say it all in the New York Police Department's 33rd Precinct tweet: (via @NYPD 33rd Precinct, Twitter)PSA: Don't put your smartphones under your pillow!  The alarm clock will still work on your night stand!PSA = Public Service Announcement 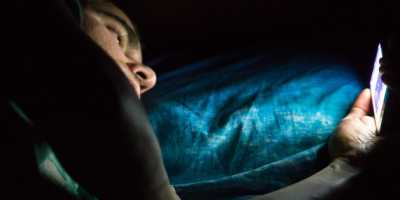 Temporary blindness from one-eye smartphone viewing in dark
Tweet
An article was published in "The New England Journal of Medicine" describing how you can get temporary vision loss, as found when getting the case history of a 22-year-old woman and 40-year-old woman.  The cause was pretty simple: lying down in bed on your side in the dark, looking at a smartphone, but only with one eye as the other eye is blocked by your pillow - when going back to using...[ Read More... ]