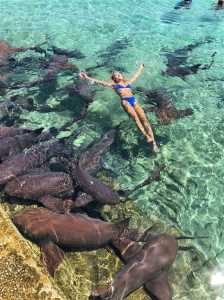 Katarina Zarutskie, 19-year-old nursing student at University of Miami and Instagram model from Laguna Beach, California, swam with nurse sharks in the ocean off the Bahamas' Staniel Cay last month.  Floating one minute and then yanked under water by a 5-foot shark the next.

"He had my wrist in his mouth and I could feel his teeth sinking into my arm," Zarutskie told NBC News on Monday. "I was pulled underwater for a few seconds and then ripped my wrist out of the shark’s mouth as fast as I could."

When she got free of the shark's bite, she swam to some steps — holding her bleeding arm out of the water to not tempt more sharks — and got out of the ocean.
(via "Shark attacks California Instagram model in Bahamas")

Zarutskie grew up as a surfer in Souther California and was not scared to jump in the ocean with the sharks, having heard from locals that swimming with nurse sharks was a fun and safe activity.

"My boyfriend’s family was freaking out when I went to swim with the sharks and I was like, 'it’s fine,'" she said.

David Hocher, who owns Staniel Cay marina, confirms people do get bitten from time to time while around the sharks.  And there is a sign posted there that says so too.

"These animals are considered quite docile but can and do bite on occasion," Hocher wrote in an email. "Normally when they mistake a hand or fingers for a piece of food."

Hocher sent NBC News a picture of a sign at the marina that warns guests that nurse sharks "can and do bite" and that visitors must "swim with the sharks at your own risk" — but Zarutskie said she did not see the sign.

Based on the photos, Hocher says that it appears Zarutskie was in the water during feeding time and that stretching out her amrs and fingers like that is tempting for the sharks.

Zarutskie got her wound cleaned and wrapped and then flew back to Florida the next day for further treatment, after researching and learning of the high risk of infection following a shark bite. 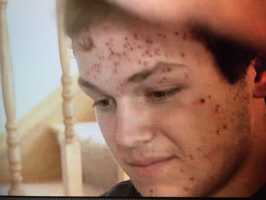 Contracting herpes from wrestling prevalent
Tweet
San Jose High School wrestler Blake Flovin says he contracted herpes gladiatorum, caused by the herpes virus, during a match.  He wants this weekend's state tournament postponed until after an incubation period is over to protect other students, as he may have exposed students during practice."Either they need to be stopped from wrestling or the state tournament needs to be postponed. Just...[ Read More... ]